Message from Academic Senate Chair: Why I Serve

As we begin a new year in the Academic Senate, and my last as its chair, I have been reflecting on how to engage more faculty in Senate service. To do so, I realized that I had to articulate why I serve. I began my committee work in 1995, and have been working on various committees, in various capacities, continuously since that time. I know that I chose to serve because I wanted to have a positive impact on the lives of the University community, faculty, staff and students, and on the health and welfare of the University as a whole. But is this a realistic goal? Does my service actually have any impact?* Can my service lead to positive change?

The answer to all of these questions is “yes,” and it is because of the unique model of “shared governance” that exists within the University of California. Shared governance has allowed the various committees, task forces and councils of the Senate to achieve remarkable gains for the faculty, and the University as a whole, during the years I’ve been engaged.

Here are a few examples of the many accomplishments: the Committee on Education Policy has assisted on major advances in distance learning and interprofessional education; the Committee on Library and Scholarly Communication has led UC’s achievements toward open access; the Committee on Academic Planning and Budget, and subsequently the new Committee on Space, have had a major impact on space planning, governance and management across the campus; the Committee on Research has altered conflict of interest policy as it pertains to the complex worlds of clinical trials and industry affiliations; the Committee on Faculty Welfare has initiated many policies and programs to benefit the lives of the faculty and have ensured the continuation of other policies like retiree health benefits; the Committee on Academic Personnel has reviewed hundreds of faculty packets yearly for promotions and special merits, and has undertaken several initiatives in support of the advancement of and diversity contributions of UCSF faculty; and on and on.

To understand how shared governance came to pass, it is interesting to review the history of the University of California and the role of the Academic Senate throughout that history. And what better time than this year…

The Organic Act was actually made possible by the signing of the first Morrill Act by President Abraham Lincoln on July 2, 1862. This law gave States public lands provided that the lands be sold or used for profit and the proceeds used to establish at least one college—hence, land grant colleges—that would teach agriculture and the mechanical arts. Even more interesting, the Act was blocked in 1861, but the secession of the southern states removed much of the opposition to the Act. Who knew that the Civil War was a prime cause in the creation of the University of California as we know it today, one of the early land grant universities in the country? That the University is a land grant college is particularly important at this time, as land grant status requires the University to support and reflect the diversity of State.

The name "Academic Senate" was in the text of the Organic Act but its roles were not established at that time. It was upon the retirement of Benjamin Wheeler as the President of the University of California that the “Berkeley Revolution of 1919” occurred. The Academic Senate, tired of the authoritarian ways of President Wheeler, presented a Memorial to the UC Regents, requesting a voice in the running of the University. This eventually led to the passage of a set of new Regential Standing Orders on June 24, 1920 (last amended in 2002). Those orders, 105.1 and 105.2 described the organization of the Senate and defined its duties, powers, and privileges. The Senate was directed to determine conditions for admission, certificates, and degrees, to authorize and supervise courses and curricula, to determine the membership faculties and councils, to advise on the budget, conduct, and welfare of the University, and to advise on the administration of the Library. They enshrined the shared governance of the University between the administration and the Academic Senate, under the auspices of the Regents.

The modern structure of the Academic Senate was created on July 1, 1963. The Representative Assembly of the Northern Section and the Legislative Assembly of the Southern Section created a special committee in 1960, which came up with a federal model that was eventually passed by the UC Senate. In this model the north-south separation was dissolved and each campus became a separate division. The legislative body of the systemwide UC Senate is the Academic Assembly, which meets about twice yearly and votes on all bylaws and other important systemwide matters. The Academic Council is the executive body of the UC Senate, meeting monthly. It is comprised of the chair and vice-chair of the systemwide Academic Senate, the chairs of each division, and the chairs of the systemwide committees which oversee the governing roles of the Senate (such as BOARS, which creates and evaluates the minimum uniform standards of eligibility for admissions across the system) as well as the chairs of Research Policy and Affirmative Action and Diversity. There are several systemwide Standing Committees that address all aspects of University business and that report to the Academic Council. The individual divisions are structured similarly, with UCSF having many standing committees and faculty councils (senate.ucsf.edu), which report to the Executive Council. All UCSF Senate faculty are in the division Assembly, which meets one to two times per year and votes on all local bylaws and other important items.

In 2016, the Regents passed Bylaw 40, which has supplanted the Standing Orders. Bylaw 40.1 details the duties and powers of the Senate, 40.2 describes the organization of the Senate, and Bylaw 40.3 presents five special provisions (for example, 40.3a states that no political test shall ever be considered in the appointment and promotion of any faculty member or employee.)

It is clear, from this history lesson of the University of California and from the actions of the Academic Senate during my years of involvement, that its faculty, through the Academic Senate, directly govern many aspects of the University and are advisory in all others. This shared governance model ensures that we faculty who serve in the Senate can affect positive change, for the benefit of the entire University community. There is no area of University life that a faculty cannot either directly or indirectly impact through Senate service. The only reason for faculty not to feel empowered would be if they decide not to serve in the Senate.

References regarding the shared governance of the University of California:

*A counterargument to my contention that a faculty senate actually has impact can be found in “Dear Committee Members,” by Julie Schumacher. In this epistolary novel, her protagonist, Jason Fitger, a professor of Creative Writing in the English Department at Payne University (“Teach til it Hurts!”) writes, in one of his many letters of reference, the following, to Dean Philip Hinckler of the College of Arts and Sciences:

I have been tapped, once again and for reasons that defy human understanding, to write a letter—during the final crisis-ridden week of the semester—on behalf of my colleague Franklin Kentrell, who has nominated himself for chair of the university curriculum committee. Given your own recent, crucial work on the selection of dirges for the all-campus picnic, you may not have had time to grasp or appreciate the nature of Kentrell's contributions. He is, to put it mildly, insane. If you must allow him to self-nominate his way into a position of authority, please god let it be the faculty senate. There, his eccentricities, though they may thrive and increase, will at least be harmless. The faculty senate, our own Tower of Babel, has not reached a decision of any import for a dozen years…”

So, what about the pie?
I have to thank my wife, Helen Loeser, for this choice. Just look at this homepage and there is no doubt that it is a winner (theorita.com). 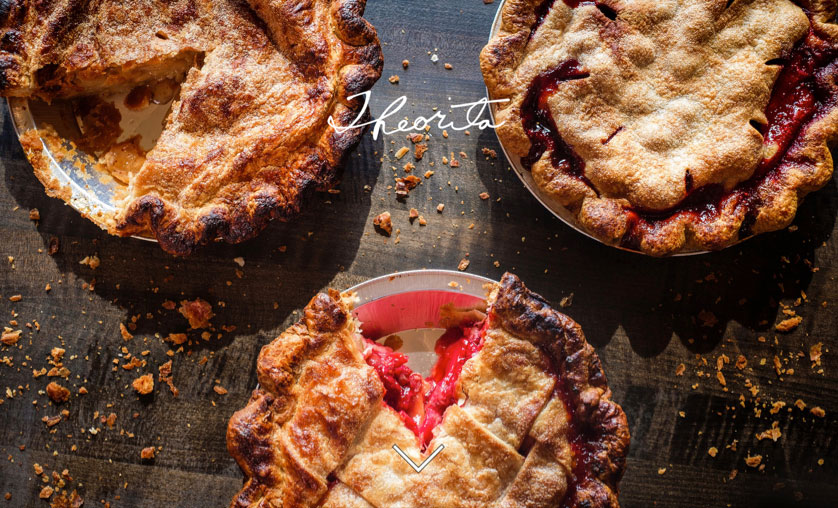 Named after her grandmother, Theorita is home to Angela Pinkerton’s most amazing pies. She might even be able to succeed in disproving Josh Gondelman’s tweet that “On the Great Jewish Bake-off, the judges look off into the distance after tasting each pastry and tell a story about a long-dead relative who used to make a better version.” Although I have to say, when I tasted her apple pie with a crumble crust, I thought of my mother’s version at the end of a Shabbat dinner and wondered whether it might not be quite as good … actually, it is. Anyway, my winner for this newsletter is her mixed berry pie. Theorita is at 834 Divisadero, just south of McAllister.

< Back to September 2018 Newsletter