The Academic Senate is pleased to announce the selection of the research duo Dr. Steven Deeks, MD and Dr. Mike McCune, MD, PhD as joint recipients of the Third Annual Faculty Research Lecture – Translational Science. In selecting this collaborative team, the Senate recognizes the contributions of faculty who translate bench science to a bedside clinical practice. Their work is directly benefiting patients and other clinicians worldwide.

Based at San Francisco General Hospital (SFGH), Drs. Deeks and McCune have consistently demonstrated elegant and creative work focused on the mechanism and consequences of immune dysfunction in HIV-infected patients. Their work challenged simplistic views of how HIV causes disease by shifting the focus from the virus to how the immune system responds to the virus. Their work has uncovered novel approaches to treat the disease by disrupting and even exploiting the immunologic cascade of events precipitated by HIV infection. Their efforts have created an environment to accelerate translational research and have set a model for multidisciplinary and collaborative "team science" now being implemented at other institutions.

Given growing recognition that antiretroviral drugs are difficult to access for many and are often not sufficient to restore health, Drs. Deeks and McCune are now directing their parallel efforts to effect a cure for HIV disease. They are applying the knowledge they have gained in studying how the immune system interacts with the virus to uncover novel ways to eliminate the virus from an infected person.

Independently, both researchers have made key scientific advances:

Dr. Deeks studies problems identified in the clinical setting. With independent NIH funding, he has made vital contributions in antiretroviral treatment interruption to elucidate HIV production kinetics and in seminal studies on immune activation as a key determinant of why HIV-infected adults develop disease. He is also working with Dr. McCune and Dr. Rafick Sekaly of VGTI, Florida to head up a major multi-university collaborative NIH grant directed at HIV eradication.

After leading a number of other start-ups in and out of academia, Dr. McCune founded the Division of Experimental Medicine in 2006, an environment that has proved to be a testing ground for translational research. His research addresses the human immunology of chronic infectious diseases such as HIV disease, and he has made important observations on the kinetics of CD4+ T loss and replacement in HIV infection, on the interface between immune activation and disease progression, and on immunologic approaches to HIV eradication. He has done so in the context of those living with HIV disease as well as in novel animal models, such as the humanized SCID-hu mouse, that he created and has, since the late 1980s, developed and optimized for the preclinical evaluation of the treatment and pathogenesis of HIV disease.

Dr. Steven G. Deeks is a Professor in Residence in the School of Medicine where he attends in the Positive Health Program. He manages a panel of approximately one hundred HIV-infected adults. He graduated from University of California, Berkeley, and received his M.D. from University of California, San Francisco, where he also served as an intern and resident in the Department of Medicine. He joined the faculty of the Department of Medicine in 1993 and has been engaged in both HIV research and clinical care since that time. He also co-directs the Population and Clinical Sciences Core of the UCSF-GIVI Center for AIDS Research and the UCSF SCOPE cohort. He is a member of the American Society for Clinical Investigation and the Department of Health and Human Services Panel on Antiretroviral Guidelines for Adults and Adolescents.

Dr. Mike McCune is a Professor in Residence and Chief of the Division of Experimental Medicine in the School of Medicine. He received his undergraduate degree from Harvard College, his M.D. from Cornell University Medical College, and his Ph.D. from The Rockefeller University. He did his medicine residency at University of California, San Francisco, starting in 1982 at the beginning of the AIDS epidemic, and postdoctoral work in pathology at Stanford University from 1985 to 1988. He joined the SFGH AIDS Clinic as a physician and has been working there ever since. 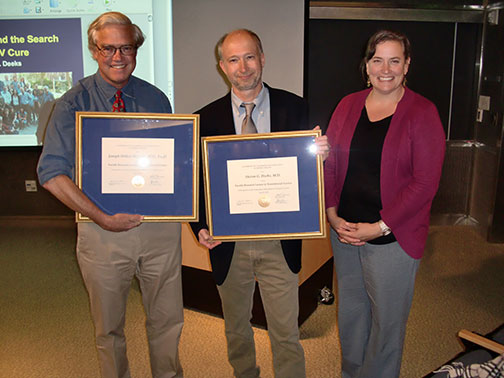 Based on the humanized SCID-hu mouse technology, he was the co-founder of the companies, SyStemix (1988) and Progenesys (1991), working to discover better therapies – including hematopoietic stem-cell based gene therapy – against HIV disease. He returned to UCSF to work at the Gladstone Institutes from 1995 to 2005 and, from 2005 until 2008, he served as the PI and Director of the Clinical and Translational Science Institute at UCSF, an organization focused on enhancing and facilitating the process by which better therapies can be brought from the lab to the community with efficiency. He is a member of the American Society for Clinical Investigation and of the American Association of Physicians.

Again, the Academic Senate Faculty Research Lecture will be held in Genentech Hall at the Mission Bay Campus on Tuesday, June 18, 2013, at 3:30pm. The event will be simulcast live for those unable to attend in person. The link will be available on the Academic Senate website the week prior to the event – it will also be sent around to this allacad@ucsf.edu listserv. Following the lecture, a reception will be held in the atrium outside of Genentech Hall.