Arturo Alvarez-Buylla, PhD, has been selected by his peers as the recipient of the 60th annual Faculty Research Lectureship (FRL) in Basic Science.

Dr. Alvarez-Buylla currently serves as the Heather and Melanie Muss Professor of Neurological Surgery, UC San Francisco School of Medicine and a member of the Eli and Edythe Broad Center of Regeneration Medicine and Stem Cell Research at UCSF. He presented on the history of his nearly 17 years at UCSF and the collaborations that have developed during that time.

The event took place on Wednesday, March 15 from 3:30-5:00 p.m. in Byers Auditorium at Genentech Hall on the Mission Bay campus. It was live simulcast, with a reception following outside Byers Auditorium. For those unable to attend or view live, the lecture was recorded and is available for viewing for up to one year after the event, through the Academic Senate website.

The FRL award began in 1957 as a way to honor an individual faculty member for an outstanding lifetime of basic science research endeavors. Nominations for the award are submitted to the Academic Senate Committee on Research (COR) and the Committee makes the final selection of the chosen recipient. It is the longest-running peer-nominated and -selected award given by UC San Francisco.

“It’s incredibly humbling to be nominated by my colleagues,” Dr. Alvarez-Buylla said. “This place has so many great people and many of the research accomplishments we have achieved is because of them.”

Professor Alvarez-Buylla’s collaborates with students, post-doctoral fellows, and other primary investigators to understand the mechanisms of neural replacement in fully formed brains. Most neurons are made during the development of the embryo, but some continue to be formed in adulthood.  The mechanism by which these new neurons born in the postnatal brain are made and their contribution to normal function and repair is what captivates Alvarez-Buylla and his laboratory.

The Alvarez-Buylla laboratory is contributing to new concepts in: neurodevelopment, possible origins of brain tumors, and new strategies for brain repair. These contributions are made possible through the identification of neural stem cells, discovering new mechanisms that allow young neurons to migrate through the adult brain, and the continuous replacement of some neurons.

Raised in Mexico City, Mexico, Alvarez-Buylla was taught at a young age to have a curious mind. Both his parents were scientific researchers. His father was a physiologist and worked alongside his mother, researching the role of the central nervous system in glucose regulation. After Alvarez-Buylla’s father passed away nearly seventeen years ago, his mother continued researching science. Now at age 82, she still heads a laboratory in Colima, Mexico and  traveled to the FRL presentation honoring her son.  Additionally, his three sisters have pursued fields linked to medicine or research.

“My father was an idealist and an incredible advocate for science,” Alvarez-Buylla said. “As I was growing up, he would constantly say to us that there isn’t anything else that a person can do that is better for humanity than doing research. Being a scientist, is like being an explorer, adventuring in the frontiers of the unknown and discovering things that might help other people.”

Alvarez-Buylla recalled during his childhood being outside with his father during the rainy season in Mexico City observing tadpoles becoming frogs. He remembers being challenged by his father on how the brain of the same individual animal had the ability to adapt to two vastly different lifestyles; water and then land.

“I became fascinated with how nerve cells become assembled into functional circuits to control behavior and what serves as the driving force to guide the formation and maintenance of the brain,” Alvarez-Buylla said. “As a naïve, young child I thought that understanding how the brain is assembled was going to be a simple task, but now that I have devoted my life to studying the brain, I have come to realize it is much more complex to approach.”

After receiving his PhD from Rockefeller University in New York City in 1988, Alvarez-Buylla went on to run his own laboratory there from 1991-2000. While he enjoyed New York, he found it difficult to escape the city and be close to nature. After looking at other positions across the nation, he decided on UCSF and the Bay Area, because Alvarez-Buylla said, “there is no better place to do science, teach and live.” 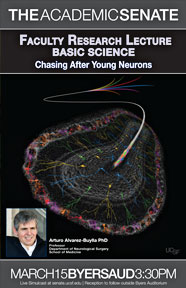 By coming to UCSF Alvarez-Buylla was able to focus on stem cell research and have the opportunity to collaborate with other investigators working in neurodevelopment and neurophysiology. His current collaborations include the UCSF laboratories of: John Rubenstain, MD, PhD; Arnold Kriegstein MD, PhD; David Rowitch, MD, PhD; Eric Huang , MD, PhD; Andrea Hasenstaub, PhD; and Michael Stryker, PhD. These collaborations, study the origin and replacement of inhibitory interneruons, uncover the regional organization of brain support cells, discover new pathways of neuronal migration in the human infant brain, and study the induction of new periods of critical plasticity in the postnatal rodent brain. In addition, the interaction with clinicians in Neurosurgery, Neurology and Pathology have led to new, unexpected breakthroughs in understanding the organization of germinal centers in the adult human brain and possible origin of brain tumors.

This collaborative work is done at the Eli and Edythe Broad Center of Regeneration Medicine and Stem Cell Research. The center is composed of 125 labs and scientists.

“One of the things that led me to UCSF was the extraordinary neuroscience program that includes great scientists working at all levels-- from molecules to behavior-- and opportunities for me to collaborate with many researchers whose work I admired,” Alvarez-Buylla said. “In my opinion, my home department, the UCSF’s Department of Neurological Surgery and the neuroscience program combined, makes UCSF one of the best places to work in brain development in the U.S., and arguably the world. I don’t think I made a mistake [coming here],” Alvarez-Buylla said.

The Alvarez-Buylla Laboratory, is located in the Ray and Dagmar Dolby Regeneration Medicine building on the Parnassus campus. Currently, Alvarez-Buylla is actively researching the embryonic origins and maintenance of adult neural stem cells in the adult brain, and how the different types of neurons they produce integrate and contribute to the function of neural circuits. The laboratory is also actively working to understand how to induce neuronal replacement in regions of the brain where it normally does not occur. For this, his laboratory employs cell culture, lineage tracing, stereotaxic-surgery, microscopy, and molecular biology.

Outside of UCSF, Alvarez-Buylla lives in Kingmountain with his family, where they enjoy being outdoors. He also enjoys at-home construction projects, going to the beach, swimming and walking his dogs.