Together Drs. Greenspan have consistently made valuable contributions to oral science, infectious disease and cancer using cutting-edge approaches. They made seminal and pioneering discoveries early in the AIDS epidemic, and throughout the rest of their careers, have steadily built upon those important initial findings. Separately, the Greenspans have promoted and contributed key research to Sjögren’s syndrome, an autoimmune disease with prominent oral manifestations.  Their lecture title is: “We Did It With A Little Help From Our Friends”.

The Academic Senate Faculty Research Lecture will be held in Cole Hall at the Parnassus Campus on Thursday, May 29, 2014, at 3:30 p.m.  The event will also be live simulcast for viewing from your office or computer either the day of the event—or upwards of a year afterwards.

Jointly, Drs. Greenspan were among the first to demonstrate the importance of oral manifestations of HIV infection, particularly, initially, oral pharyngeal candidiasis and later, co-discovered the lesion oral hairy leukoplakia. This crucial discovery of an unusual and unexpected mouth lesion opened up an important area of basic and translational research and showed its association with Epstein-Barr virus infection. It suggested that failure of local mucosal immunity may be one of the first indications of a system compromised immune by HIV. Their pioneering research also focused new attention on oral manifestations of HIV including development of Hodgkin’s lymphoma, Kaposi’s sarcoma, aphthous ulcers and warts.

Notably, many if not all of their studies have been carried out and presented as a team, with essential and important contributions made by each. Not least, both Drs. Greenspan have played critical leadership roles on multiple local, campus, national, and international stages, many aimed at facilitating the pursuit of translational science here and abroad.

Both Drs. Greenspan have served as President of the International Association for Dental Research.  Dr. Deborah Greenspan received the American Dental Association’s Norton D. Ross Award and most recently, Dr. John Greenspan received the ADA Gold Medal Award for Excellence in Dental Research. For their outstanding achievements, both have been elected to the Institute of Medicine of the U.S. National Academies of Sciences and are Fellows in the American Associate for Advancement of Science.

There is a long list of the Greenspans leadership roles at UCSF that speak to their collaborative spirit, professionalism, and commitment to research and the development of faculty.

Since 2005, Dr. Deborah Greenspan has served as Chair of the Orofacial Sciences Department, a new department created from the realignment within the School of Dentistry that she has built up.  She has also previously served as Chair of the UCSF Academic Senate, Chair of the Committee on Equal Opportunities, member of the Steering and Development Committees of the AIDS Research Institute and Clinical Director at the UCSF Oral AIDS Center.

Most recently, Dr. John Greenspan is the Associate Dean for Global Oral Health and a Distinguished Professor in Oral Biology and Oral Pathology in the School of Dentistry.  He is also a Distinguished Professor of Pathology in the School of Medicine. He was Chair of the UCSF Academic Senate, Chair of the Committee on Research and served as Senate Parliamentarian. In his career, he has also served as the Director of four components of UCSF AIDS Program: the Oral AIDS Center, the AIDS Clinical Research Center, the UCSF AIDS Specimen Bank which he established in 1982, and the campus AIDS Research Institute (2003-2012).

Independently, both researchers have made scientific advances:

Dr. Deborah Greenspan has provided innovative findings on the effects of cancer therapies and antiretroviral treatment on the oral cavity, and has helped to develop new treatments for oral, mucosal, and salivary gland disease.  She has been active as well with programs dedicated to the academic advancement of women, particular the Women’s Interagency HIV Study (WIHS). She has also helped support the Oral HIV/AIDS Research Alliance as part of the NIH AIDS Clinical Trials Network. Both she and John Greenspan have also been much lauded for their ability to pull together multidisciplinary teams of lab scientists, clinician-scientists and epidemiologists to study HIV patients (and other diseases).  This model has been since replicated in other locales at UCSF, making it one of the most productive arenas for translational science.

Dr. John Greenspan has been crucial in the development of research into the oral aspects of AIDS/HIV and the diagnosis criteria, epidemiology, and treatment of Sjögren’s syndrome.  Together with Dr. Troy Daniels, Professor of Oral Pathology, UCSF, he competed successfully for a contract with NIH/NIDCR to develop a nine-site international research resource, the Sjögren’s International Collaborative Clinical Alliance (SICCA).  This effort, now completing its tenth year of continuous funding, has enrolled over 4,000 participants worldwide into a research registry that is unique in its breadth and depth of clinical data and biospecimens collected. 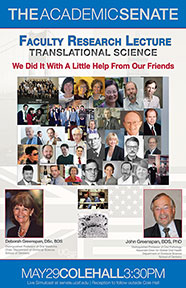 Again, the Academic Senate Faculty Research Lecture will be held in Cole Hall at the Parnassus Campus on Thursday, May 29, 2014, at 3:30 p.m.  The event will also be live simulcast for viewing from your office or computer—and for upwards of a year after the lecture.