The Academic Senate is pleased to announce the selection of Esteban G. Burchard, MD, MPH, as recipient of the Twentieth Annual Faculty Research Lectureship in Clinical Science for his contributions to asthma research. The lecture, titled “My Wonderful Journey from the Hood to Academic Medicine”, will take place on Tuesday, November 02, 2021, at 3:30 p.m. via Zoom.

Dr. Esteban González. Burchard is a physician-scientist at the University of California, San Francisco (UCSF). He is a Professor of Medicine and Pharmacy. Dr. Burchard is the Director and founder of the UCSF Asthma Collaboratory, the largest gene-environment study of asthma in minority children in the U.S.  He is also the Director of the Center for Genes, Environments & Health, which focuses on population genetics and precision medicine in racially diverse populations. Dr. Burchard is well known for his genetic research and the use of genetic ancestry to improve the diagnosis of lung disease among racial/ethnic populations. His research has focused on understanding the complex issues surrounding race, genetic ancestry, and health disparities.

Dr. Burchard was born and raised in San Francisco’s predominantly Latino neighborhood known as the Mission District. He earned his M.D. from Stanford University School of Medicine and completed an internship and internal medicine residency at Harvard’s Brigham and Women's Hospital. He then completed a sub-specialty fellowship in Pulmonary and Critical Care Medicine at the University of California, San Francisco. Dr. Burchard later earned a Master’s in Public Health in Epidemiology at the University of California, Berkeley.

Dr. Burchard’s nomination was based on his outstanding scientific achievement and its immeasurable impact on the lives of populations across the globe. Dr. Burchard and his colleagues created the U.S.’s largest and richest gene-environment data set on minority children with asthma. The Genetics of Asthma in Latino-Americans (GALA) study investigates the range of factors, including socioeconomic status, environmental exposures, and genetics that contribute to wide differences in asthma severity, prevalence, and drug response among Latino children. Dr. Burchard and his colleagues also created the Study of African American, Asthma, Genes, & Environments (SAGE), which applies advanced gene-environment methodologies to understand asthma disparities in African American children. 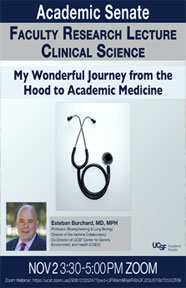 Recently, he spearheaded the Puerto Rican Infant Metagenomic and Epidemiologic study of Respiratory Outcomes (PRIMERO); Puerto Rico’s first birth cohort study. The goal of PRIMERO is to identify the early life origins of severe respiratory disease and asthma. PRIMERO was one of few NIH studies recruitintg during the COVID-19 pandemic and just enrolled it’s 1,000th participant. Dr. Burchard is also the Principal Investigator of the Asthma Translational Genomics Collaborative (ATGC), the largest whole-genome sequencing study of asthma in the world.

Dr. Burchard has used genetic data from his large cohorts to address the national debate on whether to use race/ethnicity and/or genetic ancestry in clinical medicine and biomedical research. Dr. Burchard and his colleagues were the first in the world to use genetic data to demonstrate that genetic ancestry can be leveraged to improve the diagnosis of lung disease among racial/ethnic populations. He and his colleagues have also demonstrated that race/ethnicity is correlated with genetic ancestry and may capture information about the likelihood of having genetic variants. These genetic variants may, in turn, have clinical significance in medicine and biomedical research.

He is also a tireless advocate for addressing racism and health disparities in medicine and intrinsic bias in the grant review, hiring, and promotions processes. He has dedicated considerable effort to create a path for recruiting, training, and nurturing the next generation of STEM leaders from underrepresented backgrounds, including accepting many high school and college students into his research group and providing them with lifelong mentorship and sponsorship. He is also the principal investigator of the University of California, San Francisco Clinical Pharmacology and Therapeutics (CPT) Postdoctoral Training Program, which trains outstanding clinical-scientists in the fields of adult and pediatric clinical pharmacology through didactic coursework and research experience.

In 2016 Dr. Burchard served as an advisor on President Obama’s Precision Medicine Initiative.  In May of 2016 Dr. Burchard was presented with the Lifetime Achievement Award from the American Thoracic Society.  In 2018 Dr. Burchard received the Lifetime Achievement Award from the National Medical Association (NMA), Allergy and Immunology Section.  He was also inducted in the Alumni Hall of Fame at San Francisco State University. Dr. Burchard delivered the Keynote Address to the Society for Advancement of Chicanos/Hispanics and Native Americans in Science (SACNAS) National Conference in 2019.

The Twentieth Annual Faculty Research Lecture in Clinical Science will be held on Tuesday, November 02, 2021, at 3:30 p.m. via Zoom.

Since 2001, this award has been bestowed on an individual member of the UCSF faculty with outstanding achievements in clinical research. Nominations are made by UCSF faculty, who consider the clinical research contributions of their colleagues and submit nominations for this prestigious award to the Academic Senate Committee on Research. Each year, the Committee on Research selects the recipient of this award.

A list of the past recipients of the award can be viewed here.